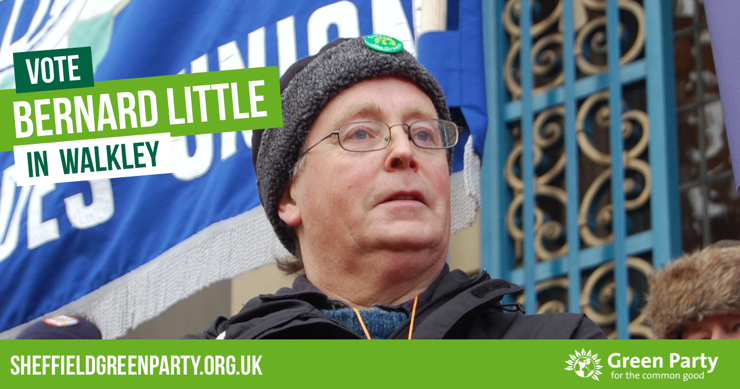 Bernard Little is the Green Party candidate for Walkley Ward in the local elections on May 2nd 2019.

“I have lived in Upperthorpe for over 20 years and was a Green councillor from 2006-2010 in the neighbouring Central ward.  Among my achievements was to successfully propose that the Council became a Living Wage employer. With my colleagues I campaigned for better quality social housing and greater security for renters. I stood up for better public transport and spoke out against Supercasinos.

I was proud to have led on the initiative to plant thousands of trees alongside community groups across Sheffield. The Green Group argued to keep the City’s Highways maintenance  “in-house” instead of the expensive, unaccountable, Streets Ahead contract. It has led to the mass felling of healthy street trees by an increasingly authoritarian Labour Council. There must be full disclosure of the contract and the work brought back in-house as a matter of urgency.

I have been an active member of the Green Party since 1977. Climate change, species loss and inequality are accelerating. Nothing short of a complete change in direction and remaking of our broken democracy is needed. All our futures depend on making such a change.

I live a few hundred yards away from Zest. It’s a vital service provider to a local community with many poor and vulnerable people really struggling after nearly 8 years of austerity. Supporting those people and protecting the services Zest provides has to be my priority – maintaining their funding streams is now a constant struggle.

The imposition of a cafe bar in Walkley library by the Labour-run council underlined a refusal to listen to local communities and a clear preference to dictate to them. I will work with local people to try and re-invigorate our community groups and tenants and residents associations and offer the support they want and need from local councillors.

Traffic jams at Hillsborough Corner and Brook Hill roundabout reflect poor transport planning and priority over past decades. People urgently need better public transport and safer cycling and walking options so they can choose to leave their cars at home. This would reduce congestion for all road users while improving dangerous air pollution and road safety.

I am married and am a proud grandparent. I am 64, currently semi-retired and in the fortunate position to be able to work every day as a ward councillor. I hope you will elect me as your local councillor in Walkley ward on May 2nd.”

If you have any questions please contact me at bernard.little@sheffieldgreenparty.org.uk