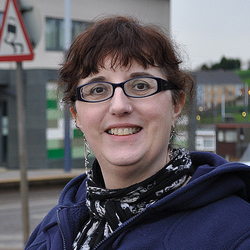 Jen Barnard is the Green Party candidate for Park & Arbourthorne Ward in the local elections on May 3rd 2018.

Jen is a civil servant. A former Labour party Election agent and Campaigns Co-ordinator, she has been involved in politics for the past 28 years. Born and raised in Sheffield, she is married with two children. Her husband Steve stood against Nick Clegg in Hallam constituency in the 2015 General Election. They live on the border with Gleadless Valley ward. She has been a Green party member for the past ten years and is a former school governor at two primary schools, and Chair of a Community Nursery.

Jen believes in leading by example. She either walks or uses public transport to get around and believes in shopping locally to help to support the local economy and keep money within the area. She recycles and reuses as much as possible, composts and gardens organically.

Having broken her leg and dislocated her foot in an accident in 2011, Jen has direct user experience of the NHS, and believes that it should not be privatised and should remain within Government control.