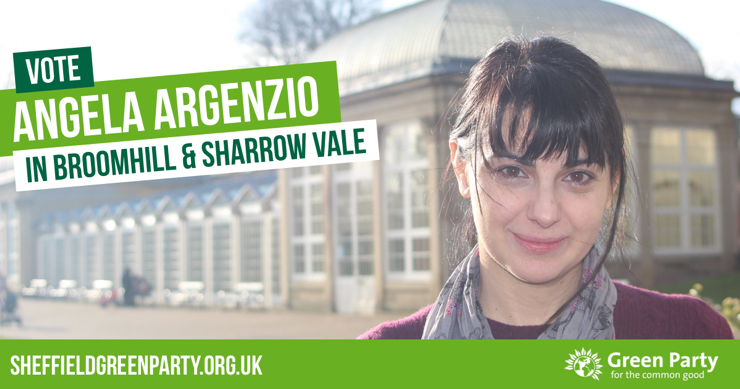 Angela Argenzio is the Green Party candidate for Broomhill & Sharrow Vale in the local elections on May 6th 2021.

“I lived locally for nearly 10 years – my children attended Broomhall Children’s Centre and King Edward VII School. I was a secondary school teacher for 16 years and now work for a Sheffield disability charity. I’m the trustee of a local human rights organisation.

I’m an EU citizen who moved from Italy to Sheffield 23 years ago and have raised my family here. I support Green MP Caroline Lucas who has tirelessly led the campaign for a “People’s Vote” on any Brexit deal, including remaining in the EU on the ballot paper. This is the only democratic way forward.

This ward is dominated by the hospitals and universities which have expanded rapidly in the last decade bringing serious traffic and dangerous air pollution issues. I will support the volunteer group BBEST whose Neighbourhood Plan for the Broomhill area with built in planning protections is nearing adoption. Whilst we all support the NHS and value our universities expansion needs to take place in other areas of the city with good access – the Broomhill community cannot cope. The Minor Injuries Unit needs to stay at the Hallamshire Hospital where it is easily accessible.

Ecclesall Road dominates the southern part of the ward – people who live close to it love the vibrancy but have a lot to put up with – parking, traffic, air pollution. Constant traffic jams reflect poor transport planning and priority over past decades. People urgently need better public transport and safer cycling and walking options so they can choose to leave their cars at home. This would reduce congestion for all road users while improving dangerous air pollution and road safety. I support the retention of threatened healthy street trees that help us breathe clean air and make our communities more than just concrete and cars.

In the Broomhall area I will work alongside Cllr Kaltum Rivers who has led initiatives to support and involve young people in addressing the underlying causes of knife crime. A key focus for me must be support for Broomhall Group of Groups, an umbrella group for all local community groups and projects including representatives from the two Sheffield Universities and local police.

I will support the many neighbourhood community groups that have a vital role as austerity dismantles precious community support networks built over decades. The now firmly established Broomhill Community Library is a welcome success story. We have a number of model community groups that welcome students each September and ensure our many mixed communities thrive.

Our communities are threatened by continuing austerity. I will work with local people to try and re-invigorate our community groups and tenants and residents associations and offer the support they want and need from local councillors.

I want to continue the good work of the current Lord Mayor, Magid Magid, who is standing down as a councillor at the end of his term. I hope you will elect me as your local councillor in Broomhill & Sharrow Vale ward on May 2nd to work alongside Cllr Kaltum Rivers. We are both committed to working hard for you and your local community.”

If you have any questions please contact me at angelargenzio1@gmail.com