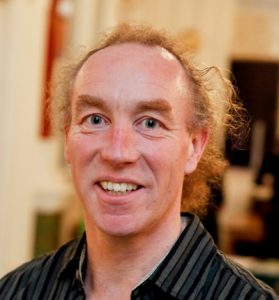 Douglas Johnson is a councillor for City Ward, along with Ruth Mersereau and Martin Phipps.

Elected in 2016, Douglas supported the Green councillors, including Jillian Creasy, Bernard Little and Rob Murphy,  for many years in Central ward.

He says, “I became involved with the Green Party because it was an opportunity to use my skills to make people’s lives better. Small-scale practical actions can get real results that make a big difference.”

Douglas’ background is as an advice worker, previously working for Sheffield Law Centre and  with a private practice solicitor, using the law to help disabled people get access to services. Before that, he worked at the council’s Housing Aid Centre, preventing people losing their homes, and at Sheffield Law Centre developing discrimination law. Successes included a ground-breaking discrimination case against the Royal Bank of Scotland, legal action to reverse the cuts to disabled people’s bus, tram and train passes in 2014, and saving the homes of many families.

A year of achievement for our Green Councillors

A year of achievement for our Green Councillors

Sheffield Greens set out vision for transport in the city

Sheffield Greens set out vision for transport in the city

Pinstone St pedestrianisation is the way ahead

Pinstone St pedestrianisation is the way ahead
More posts