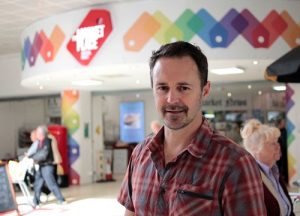 Anthony Naylor is the Green Party candidate for the by-election in Beighton Ward on October 12th. The election is being held following the resignation of Labour Cllr Helen Mirfin-Boukouris.

“I have lived close to Crystal Peaks for many years and The Market Place was the perfect place to start my photography business. I speak to many people, building an understanding of the issues of people living in the area. Plus the issues of people travelling from distance to shop at Crystal Peaks. Based on these conversations I recently started a petition for parking improvements which gained 600 signatures. This has been recognised by Crystal Peaks management with changes now due to improve access.

The response to the campaign to preserve healthy street trees and collapse of the Sheffield City Region devolution deal due to party in-fighting show the Labour run council are not listening to the public. Or acting in our best interests. This by-election provides an opportunity to start making the changes urgently needed by electing a councillor from a party other than Labour to represent Beighton ward.”

Please forward any enquiries to Election Agent Eamonn Ward via eamonn.ward@sheffieldgreenparty.org.uk or 07503 883740