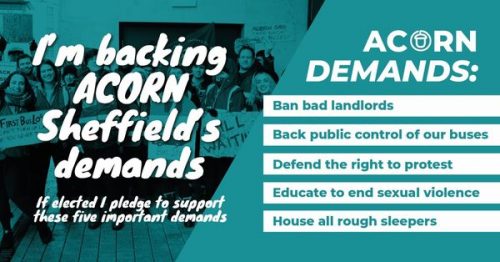 Sheffield Green Party candidates are supporting ACORN’s 5 pledges as part of our election campaign, to work to implement them in our terms of office if we are elected.

This is our detailed response to the pledges.  We really value and support the work that the many volunteers for ACORN do supporting vulnerable people in communities across the city.

We welcome these demands from the community union ACORN and stand with them in their fight for social justice. As a party that places community at the heart of our policy it is no surprise that we agree with these demands.

We have long supported the tenants movement of which ACORN is a part and have called for city-wide licensing of rented properties in order to better protect tenants from bad landlords. We support the building of new social housing in order to tackle the housing crisis. This housing has to be built to a high standard with well insulated council homes, fitted with solar panels to keep resident’s energy bills low and help eradicate fuel poverty.

Back Public Control of our Buses:

Greens have been at the forefront of the campaign to bring buses into public hands and we fully support this campaign. Green councillors in Sheffield brought forward a motion in 2018 to put pressure on the City Region Mayor to use their powers to do this. We also support buses transitioning to producing zero carbon by 2030. This year Sheffield Green Councillors put forward proposals for a publicly owned, free, daily, electric city centre circular bus service (like the FreeBee buses in Manchester) This was rejected by the Labour led council. We support introducing a work-place parking levy that could subsidise public transport to keep it affordable and invest in active travel, such as free e-bike rental.

Defend the right to protest and oppose the Policing Bill:

We are a party of non-violent direct action and we oppose any attempt to restrict peaceful protest. Our MP Caroline Lucas has been arrested for non violent direct action and we supported the successful non-violent protests against the unnecessary felling of Sheffield street trees. We unequivocally support the right to protest and oppose the Tory government’s Policing Bill that would restrict the democratic right to protest. The bill will also undermine action to tackle social issues such as systemic racism, misogyny and the climate crisis. Sheffield Green Party has felt the impact of attempts to curb peaceful protest locally, through the Labour led council’s use of draconian anti-trade union laws to wrongfully arrest its own citizens. We need to oppose any attempt to suppress our right to protest.

We agree that there needs to be a cultural shift in order to protect women and girls from misogyny and male violence. Our deputy leader Amelia Womack has been leading the campaign to make misogyny a hate crime for many years and has stated that “The #metoo movement has underlined our need for a major culture shift, to change the way women are treated in our society.”

We are proud of the work that our local Green Party Peer Natalie Bennett is undertaking on the Domestic Abuse Bill, although we cannot end violence against women and children through legislation alone, the quality of our existing legislation is not sufficient. For example, we must end ‘no recourse to public funds’ for domestic abuse victims and properly fund and support services for people who experience domestic abuse or sexual violence.

House All Rough Sleepers in Sheffield:

We would push for Sheffield City Council to pursue the ‘Housing First’ approach being implemented at pace by the Green-led administration in Brighton & Hove. By buying up empty housing across Sheffield and renovating it to house rough sleepers or people living in insecure, temporary housing (such as hostels) we could move to eradicate homelessness in the city. The action during the pandemic has shown that it is possible to house everyone and this is what we should aspire to achieve.  Our national policy is that “nobody should be left homeless, and nobody should sleep rough on the streets, in the 21st century” and we would pursue this aim.

Thanks to Declan Walsh and Rebecca Mulvaney for drafting this response.