The Labour and Green Groups can confirm they have reached an agreement to form a new co-operative administration. 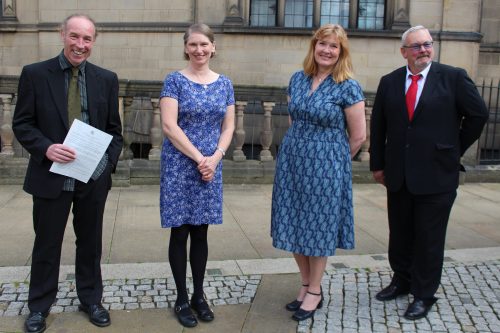 Following the local elections on 6th May Sheffield where no party has an overall majority, political parties have been in discussions to ensure the council has stability and effective leadership needed to lead the city’s recovery over the next year. Both Labour and Green groups are committed to working in an open, inclusive and democratic way and ensuring the council has stability and effective leadership.

Initial discussions were held to form a joint administration included all Labour, Green and Liberal Democrat Groups. However, the Liberal Democrats declined to join the Executive. If they were to reconsider this decision, both parties have made it clear the door remains open for the Lib Dems to join the new collaborative working in the council.

As part of the co-operation agreement, the nomination for Terry Fox as Leader and Julie Grocutt as Deputy Leader of the Council will be supported by both parties and the Council’s Executive will be made up of 10 members. This will be politically proportionate, with seven Labour members and three Green members.

To support result of the Sheffield governance referendum – a new politically proportionate transition committee model will be introduced, piloting a new way of working in the council to facilitate the transition to the committee system.

In order to support Sheffield’s recovery and renewal following the impact of the global pandemic, the co-operative administration set out a number of first-year steps and has committed to:

“We are delighted to announce this agreement today which represents a new era of politics in our city. Our priority is to put Sheffield first and party politics aside.

“We have worked together to develop this new way of working, with parties coming together and we are committed to making this succeed for the people of Sheffield. Now is a crucial time for Sheffield as we come out of the pandemic and it is more important than ever that we can provide the leadership the city needs.

“We had hoped to make this a triangular arrangement, but unfortunately the Lib Dems didn’t want that, but the door is always open.

“I know that many people thought that this sort of agreement would not be possible and parties wouldn’t be able to work together. I would like to thank the Greens for the way in which they have conducted the negotiations. I look forward to working with them in this partnership.”

“This heralds a new way of working.  For the first time, more than one party is represented in the council leadership.

“I am delighted to take part in delivering what the people of Sheffield have voted for in the referendum – a vote for change.  That change means dialogue with other parties, cross-party commitments to provide leadership and a commitment to respect each other. I am pleased that the last week has proved that our two parties can reach consensus on many issues.

“We will put meaningful action to address the climate emergency at the heart of what we do and look forward to a new period of co-operation.”

“I don’t underestimate the personal, as well as political, challenge of working with the Labour group, considering my history in opposition. However, we are facing unprecedented circumstances which demand new ways of working. We must co-operate with other parties in the best interests of residents, the city, and the environment. I am pleased to be a part of this, and I am optimistic for this new co-operative Cabinet.”

“This agreement represents a new partnership for the city that will put Sheffield first and lead on the city’s recovery as we come out of the pandemic.

“The real work starts now as we look to give power back to our communities through the implementation of Local Area Committees, to put more safer neighbourhood wardens on our streets, to invest in our young people and to support the renewal of our district centres, as well as crucially delivering our shared ambition for Sheffield to reach net zero.”

The membership of the new Cabinet is below: