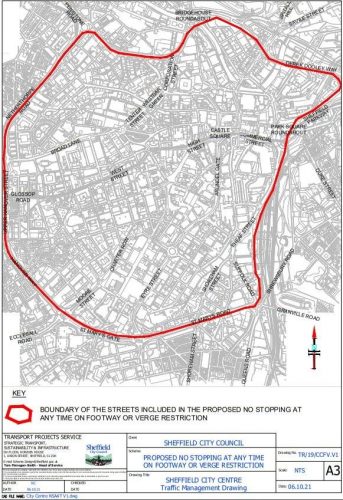 Sheffield Greens are celebrating after introducing a ban on pavement parking in Sheffield City Centre.

Green Councillor Douglas Johnson is the Executive Member for Climate Change, Environment and Transport and authorised the decision.

“It’s great news that the pavement parking ban is going ahead. Pavements are for people, not cars, and I’m really pleased that with Greens in administration of the council we’ve been able to move this forward”

The Council’s Cooperative Executive report highlighted the impact of pavement parking on pedestrians, particularly people with visual impairment, wheelchair users and parents with buggies. The good availability of off- and on-street car parking in the city centre demonstrates there is no shortage of legitimate parking.

To enforce the pavement parking ban, the Council has brought in a new Traffic Regulation Order covering the city centre so the Council can issue Penalty Charge notices to drivers who park on pavements.

“Up to now, only the police could deal with vehicle obstructions on pavements. it was difficult to get swift action on inconsiderate and dangerous parking, despite it being a regular source of complaints from the public. Enforcement has been talked about for years and I am pleased we have finally been able to introduce the formal powers to take action.

“This is a big win for people who just want to use pavements safely without being obstructed by a vehicle. For people who have poor mobility or who are visually impaired, being forced to go out into the road is not just an inconvenience but dangerous. Now we have the legal power we need to tackle this problem. People will now be safer in our City Centre.”