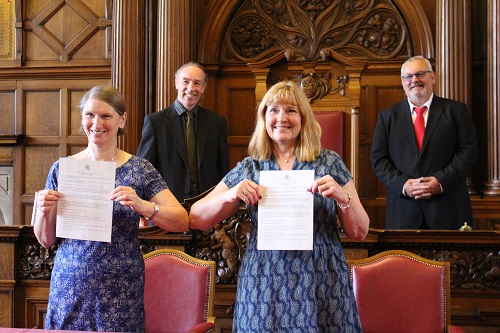 Councillors Douglas Johnson and Alison Teal made the case for having Greens on the council Executive, at July’s full council meeting.

This comes after the Greens negotiated an historic agreement with Labour councillors to form a two-party Administration. The LibDems decided not to work cross-party.

However, Greens secured an agreement with Labour to allow space for the LibDems to take seats on the Executive at any time, forming a true Rainbow Cabinet.

“As the smaller party in a hung council, it would have been easy to stand on the sidelines and criticise. The threats of climate change and social injustice, however, mean that we have to take on the challenge of making the city better.

“This two-party administration is unprecedented in Sheffield and I hope it will change the way the council runs to a more grown-up form of politics.”

“If the results of the It’s Our City referendum are not reason enough, then the multiple crises we face – the Covid-19 pandemic, inadequate local government funding, and the climate and nature emergencies – all surely combine to highlight the need for elected representatives to join forces in an unprecedented co-operative effort to work for the common good of the people of Sheffield.”

(h)           asserts that the historic first of a two-party Administration for this great city is an essential marker of openness, civic responsibility and genuine collaboration; and that this must be better for the people of Sheffield; and

(i)            believes that tackling global climate change and the ecological emergency requires both responsibility of leadership and collaboration at all levels of government to succeed.

The amendment was passed.