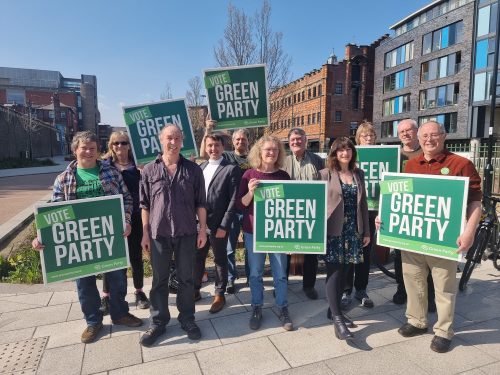 The Green Party has launched its 2022 Local Election Campaign with a full slate of Green candidates contesting elections across the city of Sheffield.

Councillor Douglas Johnson, leader of the Green Group of councillors speaking to ‘The Star’ said,

“It’s about bringing people together, building community strength and looking after each other so taking away those competitive dog-eat-dog approaches to politics and looking, where we can, for a more harmonious politics where there is more collaboration.

“That is what we have been doing for the past year since the last local elections where for the first time the Greens have been in the executive of the council actually trying to run things as best we can and we hope to do more of that next year.

“We are hoping to get some more councillors as it is important for the city that the council stays in no overall control. Frankly, it’s worked an awful lot better this year than when it was a single party administration in previous years. No overall control means parties have to cooperate with each other. It’s certainly tricky; we certainly don’t agree with everything but, with that collaboration and compromise, you get better decisions and that is the best thing for the city.

“The track record of Green councillors is they work hard in their wards and they do make a positive contribution. We have always been a small group: think what more we can do if we are a bigger group.”

“There are some really encouraging things going on. At the same time we pay credit to the huge amount of work that Councillors Kaltum Rivers and Alison Teal have put in over the last few years. They have really worked hard, in very different ways, raised the profile and really pushed the argument about why it’s important to be Green and what that looks like because it’s such a varied thing. It’s not just the traditional ecological approach: being Green is all about being part of the community.”

Marieanne Elliot, the Green Candidate for Gleadless Valley, also speaking to The Star,

“I’m absolutely delighted to be the candidate for my area because I feel really lucky to be part of such an active community where I live.

“Like many people, I became more politically active and awakened when it became apparent that the Labour-run council was illegally felling street trees. I was so inspired by the community action and the strength of power in that group and it made me, and many other people, ask questions.

“It’s been really nice to see my Green colleagues joining the Council’s Administration and bringing forward positive change. I think it’s not only to do with the measures that have been brought in, like the Clean Air Zone, it’s actually changing the culture of the council and it’s started a new era of openness and transparency.”