Here’s a list of our current campaigns. Why not get involved? 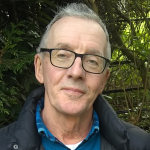