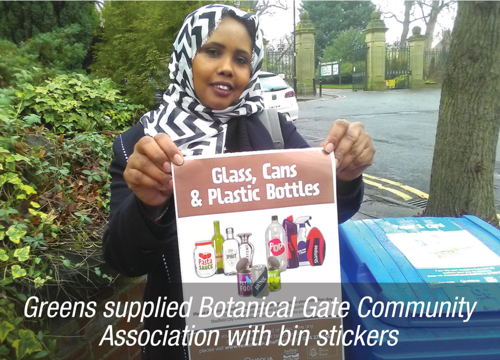 Parking will soon be removed between Glossop Rd and Brocco Bank with double yellow lines creating safer cycle lanes. Coach spaces outside The Botanical Gardens and King Edwards Swimming Pool will respond to their needs. Angela Argenzio comments: “We support the changes – cars blocking cycle lanes create real danger. The council must do more to make cycling safe, drawing on the experience and expertise of Cycle Sheffield.”

Sheffield Litter Pickers are volunteers enabling local people to keep their neighbourhoods litter free. Broomhill Community Library have committed to cover the Broomhill area (see launch event picture) but they need a lead volunteer to work with library volunteers and the S1 0 Litter Ambassador. A lead volunteer is also needed for the Broomhall group. If you’re interested contact ghoulton4@gmail.com for more information about your postcode area.

Angela working in your area 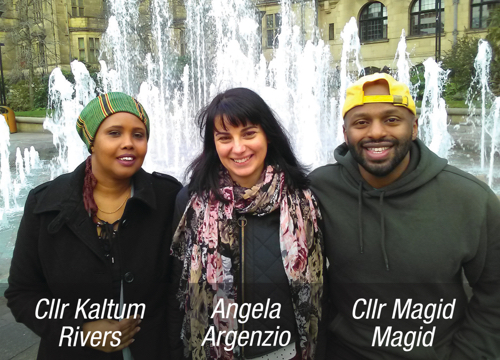 Angela Argenzio will be the Green candidate here in May council elections. Angela says: “I lived in Hunters Bar for 9 years with children attending Broomhall Children’s Centre and King Edward School. I was a secondary school teacher for 1 6 years and now work for a Sheffield disability charity. I’m a trustee for a local human rights organisation and passionate about social justice and equality. I want to use my local knowledge and experience to offer support and improve people’s lives across this diverse ward.”

Green councillors are encouraging the views and involvement of young people to address the underlying causes. Lord Mayor Cllr Magid, addressed 1 00 Young Peacemakers saying “You are amazing volunteers helping younger students resolve disputes at break times in ways that work for them. You make a real difference to your schools and communities”. Read Cllr Rivers’ Star Viewpoint on young people and knife crime.

Green MP Caroline Lucas, Green MEPs, party leaders and Sheffield Greens have been campaigning tirelessly for a People’s Vote on any EU deal including a ballot paper option to remain in the EU. Caroline Lucas voted for the No Confidence motion on January 1 6 saying “The Prime Minister has failed to tackle any of the underlying injustices & inequalities that drove the Brexit vote.”

Can we help you?