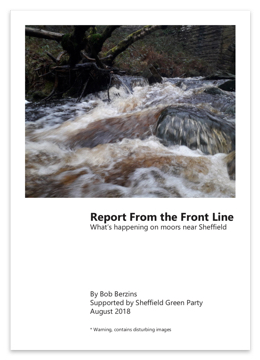 As the start of the driven grouse shooting season on the 12th of August approaches, Sheffield Green Party has released a report on the state of the moors, including the slaughter of wildlife on them.

The report, written by (and with photographs largely taken by) local moors champion Bob Berzins, is titled: Report from the Front Line: What’s Happening on Moors near Sheffield.

Bob explained: “This report aims to inform the public about what’s happening in areas around the city that can have a big impact on our life, but which many are unable to see for themselves.

“As we stand at a marker of the height of major floods in Sheffield, it will be a reminder of the vulnerability of our city. As this report outlines, the management of the moors for driven grouse shooting increases the flooding risk.

“It also explains how there’s a slaughter happening on our uplands. That includes the illegal killing of magnificent birds of prey, but also the legal slaughter of beautiful, iconic mountain hares, of stoats and weasels, and many other species. I think the people of Sheffield should know that is happening, and I’m sure many will have strong objections.”

Natalie Bennett, former Green Party leader and Sheffield Green Party member, who spoke at Sheffield Hen Harrier Day on August 4, and will be speaking at similar events in the South East and Midlands at the weekend, said: “Not everyone is able to get up on the moors, but Bob’s pictures and clear account provide an explanation of what’s happening there has an impact on all of us: through the loss of biodiversity and bioabundance, reduced storage of greenhouse gases, and increased flood risk.

“Campaigners have been doing great work documenting what’s happening there, and public awareness is growing. That provides a degree of protection for raptors like the hen harrier, and I hope soon for the beautiful, innocent mountain hares and other animals, which die to maximise the number of grouse available to be shot on the Inglorious Twelfth of August when the grouse shooting season starts.”

The report is supported by Sheffield Green Party, of which Bob is a member.

Download Report From the Front Line: What’s happening on moors near Sheffield (pdf)